Corey Arnold: Fishing in All the Right Places

Part of keeping the creative juices alive, is staying inspired. I do this in many ways such as going to art openings, reading blogs, creating things with my hands, and seeing other artists and marketers speak about their work. This morning at Creative Mornings (a global breakfast lecture series for creative types), I went to see Corey Arnold tell the story of how he became the wildly successful fine art and commercial photographer he is today.

It was a very romantic and inspiring story and yet also a recipe we’ve heard before for success: follow your passion, be incredibly good at what you do, and take chances. 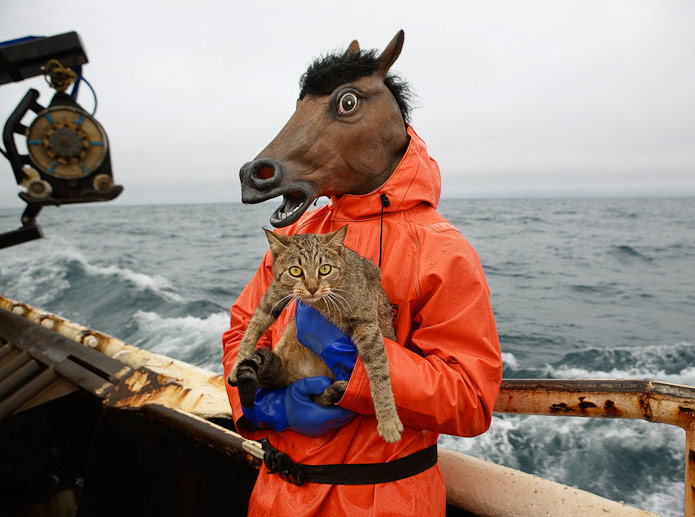 “Portland based photographer and fisherman himself (Corey’s starred on the popular show Deadliest Catch), Corey Arnold, has been traveling the world documenting the world’s fisherman since 2002.” – FecalFace.com

Growing up, Arnold’s father instilled in him a love for fishing and photography – two passions they both continue to follow. Arnold loved fishing so much that as a kid he dreamt of becoming a professional fisherman, without having a keen understanding of what exactly that entailed. He did get into commercial fishing, eventually taking on risky and difficult assignments on crabbing boats up in Alaska. He also took the chance of transferring from pursuing a science degree out to San Francisco to hone his photography skills at The Art Center, and started putting his work out into the world through a website. According to him a key turning point was when the crudely named killer art blog FecalFace.com (yes you read that correctly) did a feature on him, introducing him to the art community. From this exposure he was connected with other artists who introduced him to gallery owners and online media portals for the arts.

Since then Arnold has received several write-ups in respected publications within the arts community, several solo gallery shows, had his horse face kitty photo grace the covers of several arts magazines, and he has a book of his photography of fishing in the Bering Sea available for purchase ($65). In the last several years he hooked up with an agent at RedEyeReps whom he also attributes some of his commercial success to. (Oh yeah, and he also starred in a little TV show called Deadliest Catch, ever hear of that one?) Clearly, Arnold has been doing something right.

First of all it doesn’t hurt that his work is amazing and that he followed the success formula above. However, there’s more to it than that. He lets his passion for what he does shine through, he has nurtured a brand as an edgy photographer of extreme fishing, and he has connected to circles of people who appreciate his style. He has put his work out there for others to find through his website, gallery openings, and speaking gigs. I have to say, it sounds like this guy has a pretty good understanding of his brand and how to market it. Good for you, Corey Arnold. Good for you.

Corey Arnold in front of Bering Sea Birthday & Kitty and Horse Fisherman at his exhibition FISH-WORK, Feb 11 – 26, 2011, at the FFDG Gallery on Mission Street in San Francisco.